Bayonets and Blobsticks: The Canadian Experience of Close Combat 1915-1918


So from what I can see there seems a fair chance that the top people might decide something sensible. Thanks very much for that really interesting answer John. I really think you could be onto something with:. Between the wars we have…. Experience seems to show that combined arms at the tactical level on up seems to be the way to go.

Did you ever read Brains and Bullets? I ordered that too! Buying books referred by TWW posters is going to put me in the poor house. C tactical combat, and it has offers some insights into tactical warfare in all periods. My day job is as a university lecturer, so I am entirely unaccustomed to having anybody follow my reading recommendations. But it has raised an incidental question: Is culture, doctrine, organisation or equipment most favoured as the prime factor?


Of course, this just pushes the question back one, because there is now the question of how they achieve better participation; and we have to believe two controversial American military commentators instead of just one. Although I have not read the study, I was assured by someone at a defence conference that such a correlation had, indeed, been found. Obviously, given the nature of Auftragstaktik, this is not incompatible with a national proclivity for trustworthiness, as in the previous point. I believe Dupuy always saw the supposed German advantage as being a cultural factor — he claimed to have controlled out any possible influece of equipment.

I tend to doubt that he eliminated the effect of equipment as thoroughly as he said he had. Dave Rowland puts a great deal of emphasis on counting MG equivalents for casaulty infliction in his historical analyses, following WW2 OR practice, and, for example, he ascribes the superior performance of the Fallschirmjaeger defending Cassino largely to the fact that they had 2 leMGs per section.


In this spirit, I note that if you count the number of bullets carried as standard issue in a typical US, British, and German rifle section, you get totals in the ratio taking the US as 1OO: And the importance of LMGs in promoting participation means such an explanation is quite compatible with the first bullet point, above. Thanks both for your replies.

» Topic: Anyone read "The Combat Soldier: Infantry Tactics & Cohesion in C20 and C21"?

This is a very in-depth look at the combat soldier from the beginning of the C20 until the present day, focusing very largely on the experiences of North American, European and ANZAC infantry. 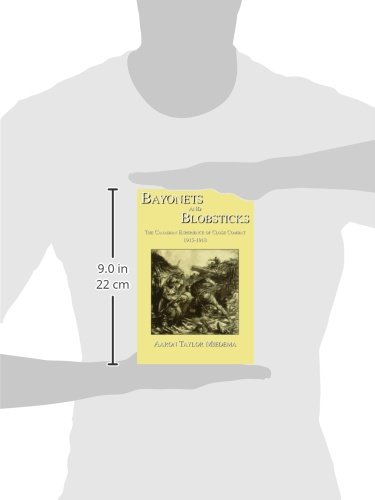 It is not a history as such, but a sociological analysis concentrating on changes in combat effectiveness over the course of this period. For those interested in the subject, it is fascinating in its detail and very thought-provoking in its thesis: He sees this as basically positive, partly because he believes that it generally increases combat effectiveness and partly because he believes it to be more inclusive: The book is what it is: Whilst I would recommend this book to readers interested in this subject, I have several reservations — all related.

But was this the reality of the Western Front of the Great War, or a myth perpetuated by historians? In reality, the soldiers of World War I seemed oblivious to what appears so obvious to critics ninety years removed. They quite liked their bayonets, and they used them - often. In this fascinating and provocative study, Aaron Taylor Miedema takes a new look at the role of the bayonet and shock tactics on the Western front.

Through the experience of the Canadian Corps - the British shock troops of the Western Front - he challenges the conventional view of the bayonet as an obsolete weapon system and rekindles the controversial debate over technologies, old and new, on the field of battle. The Rules of Riding: Elizabeth MacKenzie Tobey, trans.