How we chose 'justice'. And is one way more correct than the others? How to use a word that literally drives some people nuts.


The awkward case of 'his or her'. Identify the word pairs with a common ancestor. Test your vocabulary with our question quiz! Garcia, azcentral , "Charges dropped against Robert Johnson, man brutally beaten by Mesa police," 14 June These example sentences are selected automatically from various online news sources to reflect current usage of the word 'unedited. First Known Use of unedited , in the meaning defined above.

The brief video showed Obama giving a speech in which he said, "And for the international order that we have worked for generations to build, ordinary men and women are too small-minded to govern their own affairs, that order and progress can only come when individuals surrender their rights to an all-powerful sovereign.

The YouTube video originated with a group from Germany that appears to dabble in conspiracy theories, including a focus on the "new world order" -- the notion of an emerging, worldwide, totalitarian government. We tracked down the speech Obama was giving. But while the clip comes from a genuine White House video, it has been edited to make an entirely different point than the one Obama was making. We meet here at a moment of testing for Europe and the United States, and for the international order that we have worked for generations to build.

Throughout human history, societies have grappled with fundamental questions of how to organize themselves, the proper relationship between the individual and the state, the best means to resolve inevitable conflicts between states.

And it was here in Europe, through centuries of struggle -- through war and Enlightenment, repression and revolution -- that a particular set of ideals began to emerge: The belief that through conscience and free will, each of us has the right to live as we choose. It's not just dishonest, this selective sorting of the facts; it's self-defeating.

Because as my mother used to tell me, reality has a way of catching up with you. Take the challenge of climate change. In just eight years, we've halved our dependence on foreign oil, doubled our renewable energy, and led the world to an agreement that has the promise to save this planet.


But without bolder action, our children won't have time to debate the existence of climate change; they'll be busy dealing with its effects: Now, we can and should argue about the best approach to the problem. But to simply deny the problem not only betrays future generations; it betrays the essential spirit of innovation and practical problem-solving that guided our Founders.

It's that spirit, born of the Enlightenment, that made us an economic powerhouse — the spirit that took flight at Kitty Hawk and Cape Canaveral; the spirit that that cures disease and put a computer in every pocket. It's that spirit — a faith in reason, and enterprise, and the primacy of right over might, that allowed us to resist the lure of fascism and tyranny during the Great Depression, and build a post-World War II order with other democracies, an order based not just on military power or national affiliations but on principles — the rule of law, human rights, freedoms of religion, speech, assembly, and an independent press.

That order is now being challenged — first by violent fanatics who claim to speak for Islam; more recently by autocrats in foreign capitals who see free markets, open democracies, and civil society itself as a threat to their power. The peril each poses to our democracy is more far-reaching than a car bomb or a missile.

It represents the fear of change; the fear of people who look or speak or pray differently; a contempt for the rule of law that holds leaders accountable; an intolerance of dissent and free thought; a belief that the sword or the gun or the bomb or propaganda machine is the ultimate arbiter of what's true and what's right. Because of the extraordinary courage of our men and women in uniform, and the intelligence officers, law enforcement, and diplomats who support them, no foreign terrorist organization has successfully planned and executed an attack on our homeland these past eight years; and although Boston and Orlando remind us of how dangerous radicalization can be, our law enforcement agencies are more effective and vigilant than ever.

We've taken out tens of thousands of terrorists — including Osama bin Laden. The global coalition we're leading against ISIL has taken out their leaders, and taken away about half their territory.

‘You Didn’t Build That,’ Uncut and Unedited

ISIL will be destroyed, and no one who threatens America will ever be safe. To all who serve, it has been the honor of my lifetime to be your Commander-in-Chief. But protecting our way of life requires more than our military. Democracy can buckle when we give in to fear. So just as we, as citizens, must remain vigilant against external aggression, we must guard against a weakening of the values that make us who we are. That's why, for the past eight years, I've worked to put the fight against terrorism on a firm legal footing.

That's why we've ended torture, worked to close Gitmo, and reform our laws governing surveillance to protect privacy and civil liberties. That's why I reject discrimination against Muslim Americans. That's why we cannot withdraw from global fights — to expand democracy, and human rights, women's rights, and LGBT rights — no matter how imperfect our efforts, no matter how expedient ignoring such values may seem. For the fight against extremism and intolerance and sectarianism are of a piece with the fight against authoritarianism and nationalist aggression.

If the scope of freedom and respect for the rule of law shrinks around the world, the likelihood of war within and between nations increases, and our own freedoms will eventually be threatened. So let's be vigilant, but not afraid. ISIL will try to kill innocent people.

But they cannot defeat America unless we betray our Constitution and our principles in the fight. Rivals like Russia or China cannot match our influence around the world — unless we give up what we stand for, and turn ourselves into just another big country that bullies smaller neighbors. Which brings me to my final point — our democracy is threatened whenever we take it for granted. All of us, regardless of party, should throw ourselves into the task of rebuilding our democratic institutions.

When voting rates are some of the lowest among advanced democracies, we should make it easier, not harder, to vote. When trust in our institutions is low, we should reduce the corrosive influence of money in our politics, and insist on the principles of transparency and ethics in public service. When Congress is dysfunctional, we should draw our districts to encourage politicians to cater to common sense and not rigid extremes.

The Globe and Mail

And all of this depends on our participation; on each of us accepting the responsibility of citizenship, regardless of which way the pendulum of power swings. Our Constitution is a remarkable, beautiful gift. But it's really just a piece of parchment. It has no power on its own. We, the people, give it power — with our participation, and the choices we make. Whether or not we stand up for our freedoms.

Whether or not we respect and enforce the rule of law. America is no fragile thing. But the gains of our long journey to freedom are not assured. In his own farewell address, George Washington wrote that self-government is the underpinning of our safety, prosperity, and liberty, but "from different causes and from different quarters much pains will be taken…to weaken in your minds the conviction of this truth;" that we should preserve it with "jealous anxiety;" that we should reject "the first dawning of every attempt to alienate any portion of our country from the rest or to enfeeble the sacred ties" that make us one.

We weaken those ties when we allow our political dialogue to become so corrosive that people of good character are turned off from public service; so coarse with rancor that Americans with whom we disagree are not just misguided, but somehow malevolent. We weaken those ties when we define some of us as more American than others; when we write off the whole system as inevitably corrupt, and blame the leaders we elect without examining our own role in electing them. 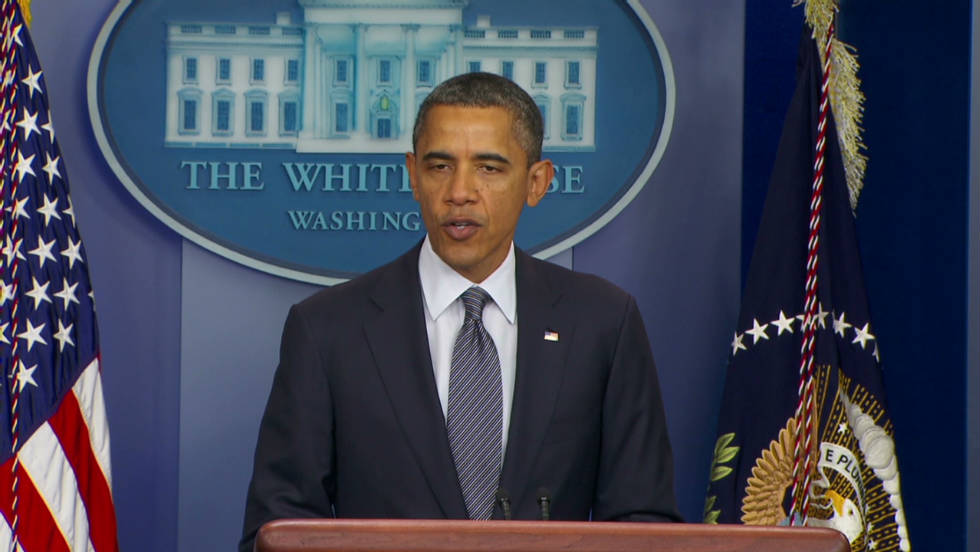 It falls to each of us to be those anxious, jealous guardians of our democracy; to embrace the joyous task we've been given to continually try to improve this great nation of ours. Because for all our outward differences, we all share the same proud title: Ultimately, that's what our democracy demands. Not just when there's an election, not just when your own narrow interest is at stake, but over the full span of a lifetime.

If you're tired of arguing with strangers on the Internet, try to talk with one in real life. If something needs fixing, lace up your shoes and do some organizing. If you're disappointed by your elected officials, grab a clipboard, get some signatures, and run for office yourself. Presuming a reservoir of goodness in others can be a risk, and there will be times when the process disappoints you.

But for those of us fortunate enough to have been a part of this work, to see it up close, let me tell you, it can energize and inspire. And more often than not, your faith in America — and in Americans — will be confirmed. Mine sure has been. Over the course of these eight years, I've seen the hopeful faces of young graduates and our newest military officers. I've mourned with grieving families searching for answers, and found grace in a Charleston church.

I've seen our scientists help a paralyzed man regain his sense of touch, and our wounded warriors walk again. I've seen our doctors and volunteers rebuild after earthquakes and stop pandemics in their tracks. I've seen the youngest of children remind us of our obligations to care for refugees, to work in peace, and above all to look out for each other. That faith I placed all those years ago, not far from here, in the power of ordinary Americans to bring about change — that faith has been rewarded in ways I couldn't possibly have imagined. I hope yours has, too. Some of you here tonight or watching at home were there with us in , in , in — and maybe you still can't believe we pulled this whole thing off.

You're not the only ones. Michelle — for the past 25 years, you've been not only my wife and mother of my children, but my best friend. You took on a role you didn't ask for and made it your own with grace and grit and style and good humor.